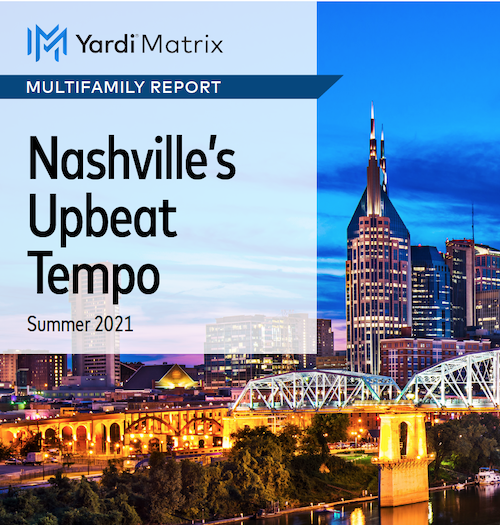 Nashville has faced several challenges over the past year. But it hasn’t stopped the multifamily market from expanding.

The Music City’s rent expansion has kept up with national growth, up 0.5% on a trailing three-month basis through April. Nashville’s rates averaged $1,311, which is 7.5% less than the national average of $1,417. 1

As of April, 16,452 units for multifamily development were under construction, including 11.5% of the existing inventory. Developers continue to target Lifestyle renters, who have wealth sufficient to own but have chosen to rent. This has resulted in comprising close to 85% of units underway. 1

Downtown-North Nashville has experienced the most construction activity with 4,223 units underway since April. Only 381 units were delivered in the submarket within the first 4 months of 2021. But, between 2018-2020, developers have added over 4,100 units. 1